The following advice was given by players regarding playing Legends using a MAC.

Harlequin Games takes no responsibility for the accuracy of this advice, or the links referred to

Parallels is an option. You have to provide a Windows operating system, but for LPE it can be an inexpensive one. A cheaper solution is CrossOver, which will run some Windows applications (including LPE) on a Mac. An even-cheaper solution is to run under mono on top of Linux, but if the player had to ask, it’s probably a bad idea to try this.

I’m happier with Parallels, but Crossover is a lot cheaper, and is fairly painless. The cost is $60. (It was $40 when I got it five years ago.) They have a free 14-day trial download, so it can be tried out without risk.

That’s pretty-much it. If you use the ‘run’ option or if you double-click on the LPE shortcut, or if you go to LPE.exe on your Mac disk, right-click you’ll get LPE running. (You can also browse to LPE.exe on your Mac disk, right-click and select open-with Crossover, and that’ll start Crossover too. The open-with option also launches something that tries to set up any Windows software it can find in Crossover. If you close that and click on Crossover in your dock, you’ll be in Crossover.)

Your LPE has the notion that it’s on your Y: drive, but for your purposes the files are where you put them on the Mac. E.g., you copy turns to the UNPACK directory of the LPE directory you unzip and you find uploads in the UPLOADS directory, etc.

The map looks the same as it does on Windows. The database browser and turn editor have a slightly-different look and feel. (See screenshot below.) If this is an issue, I think it may be addressable by downloading and installing some X11 components. 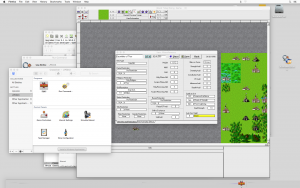 I use Virtual Box to emulate a x86 (ie PC) computer. Then you have to actually install a Windows operating system. I used an old copy of Windows XP, that i had lying around

Virtual Box is OPEN SOURCE but developed by Sun Microsystems. So it is pretty good and FREE!!!! https://www.virtualbox.org

I’ve never had any problems running LPE or the other user programs developed for Legends, such as ItemLister etc

I run Win7 in a virtual drive in a program called Parallels (https://www.parallels.com) but it costs $79.00(US) on my MacBook Pro.

There are a few freebie VM’s out there you can use as well.

I run the Mono project (https://www.mono-project.com) on my Linux desktop (CentOS) which can beat the LPE into submission but it’s not as easy.

These articles have been written over a period of 20 years, and as such, some of the information may be out of date. Harlequin Games takes no responsibility for the results of any action taken in game based on any of article.

All you need to know about diplomacy.

Everything you need to know about guilds.

A detailed look at (M) military orders and character retreats, together with answers to frequently-asked questions about encounters.

To start up in a Legends game costs £5

Note that The One Ring module turns costs are slightly more expensive (to cover royalty payments):

Costs are inclusive of VAT in countries where VAT is charged.